Analyzing prediction results is a critical step in evaluating the performance of trained models. We demonstrate how you can use Excel with the Engine to test and evaluate your model, with our batch prediction feature.

The AI & Analytics Engine automatically evaluates trained models based on a train/test split. In addition, the engine also caters to users who want to test, evaluate or analyze the model’s performance using their own test set that has not yet been uploaded to the platform, through the batch prediction feature.

A step-by-step guide for generating and downloading batch prediction results as a CSV file from a trained model can be found here.

In this article, we show you how you can use your downloaded batch prediction results offline to analyze your models' performance using spreadsheet software, such as Excel.

The batch prediction feature generates predictions from a model trained on the engine, based on an input file. The resulting file contains the prediction column(s) and can additionally include columns from the input file as an option.

The additional columns in the batch prediction file can be helpful in testing the model performance on new data offline. For example, the ground truth values of the target can be added to the input file for batch predictions. In that case, the batch prediction file generated by the engine contains both a ground truth value column (from the original input file) and prediction column(s) (added by the engine). We can analyze these columns to test the model performance. Such model testing is quite useful in deciding the next steps, such as determining whether we can continue to use the same model or if we need to fit a new model.

Need some help figuring out how the Engine can help with your specific business problem? Book a demo with us, and our team is happy to get you up and running!

The figure below shows a part of an example prediction CSV file downloaded from the engine with both the ground truth values and predicted classes and prediction probabilities from a classification problem. 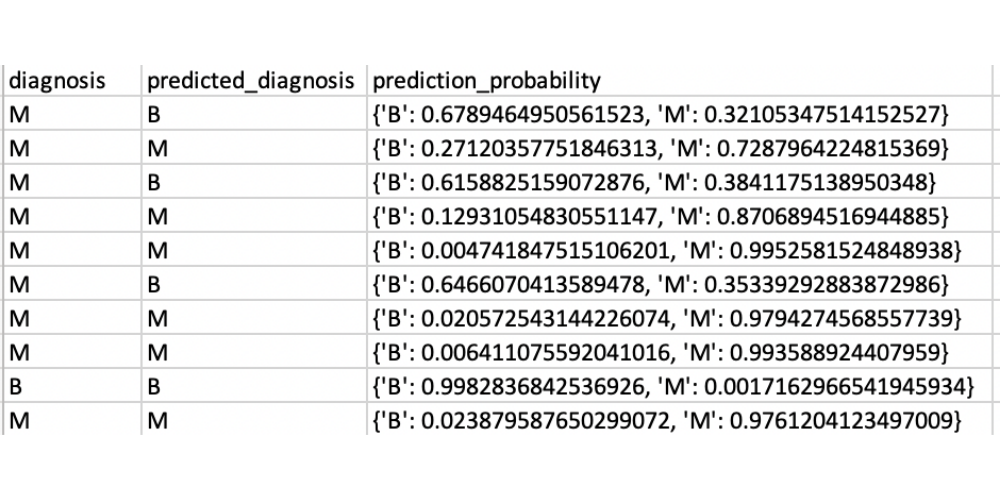 Figure 1 (above): Batch prediction output for a classification problem. Note that the other columns in the file are not shown in the figure for clarity.

The following sections discuss two examples where we can use spreadsheet software, with Excel as an example, to analyze model performance based on these batch prediction outputs for a regression problem and a classification problem.

Let’s use the “Ames Housing dataset” from Kaggle for this. You can get the dataset here. The dataset contains features related to houses, with house price as the target column. A model was already trained and deployed and batch predictions were obtained for 200 observations. The actual house prices for the same 200 observations are also available in the same batch prediction output. 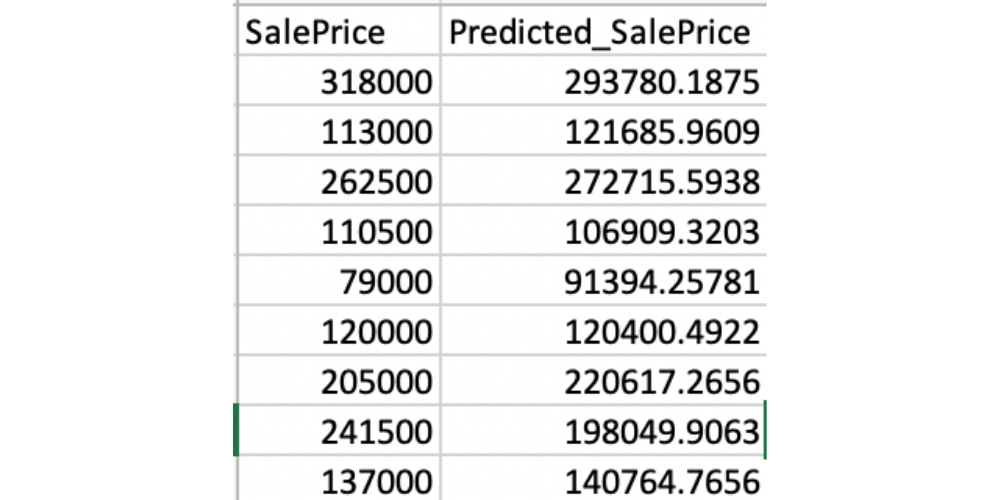 Figure 2 (above): Batch prediction output for the house price prediction problem. The other input columns in the file are not shown in the figure for clarity.

These actual and predicted values can be used by Excel formulas to calculate different regression metrics used for evaluating the model performance. For example, below are screenshots illustrating the steps that we can take to calculate the root mean squared error and the “R squared” score of the predictions. 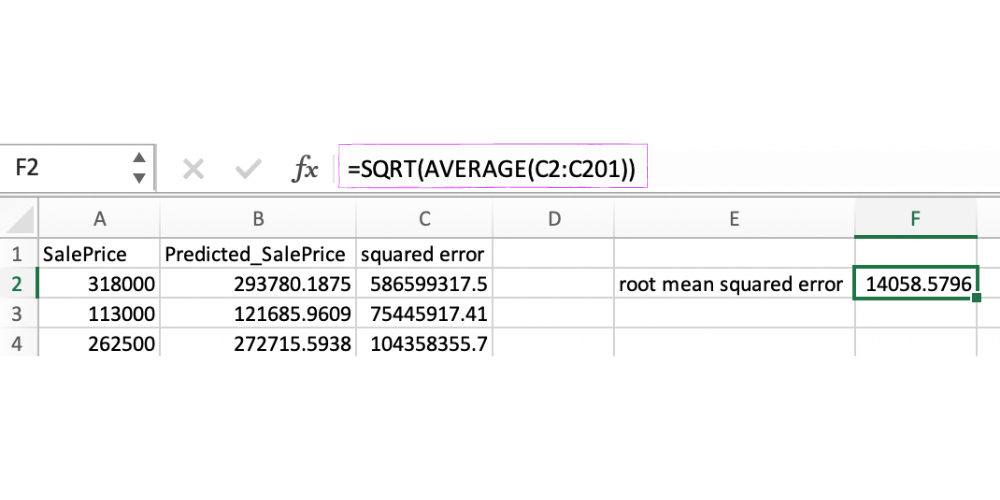 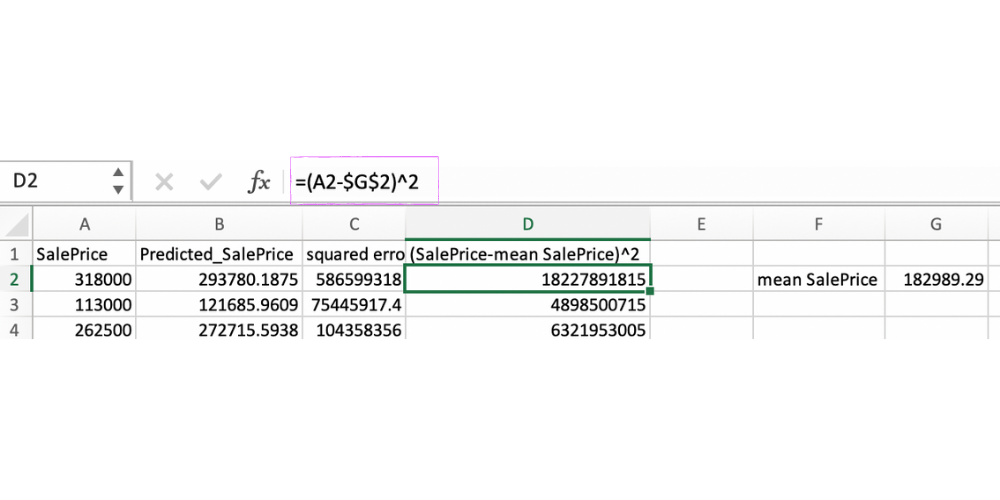 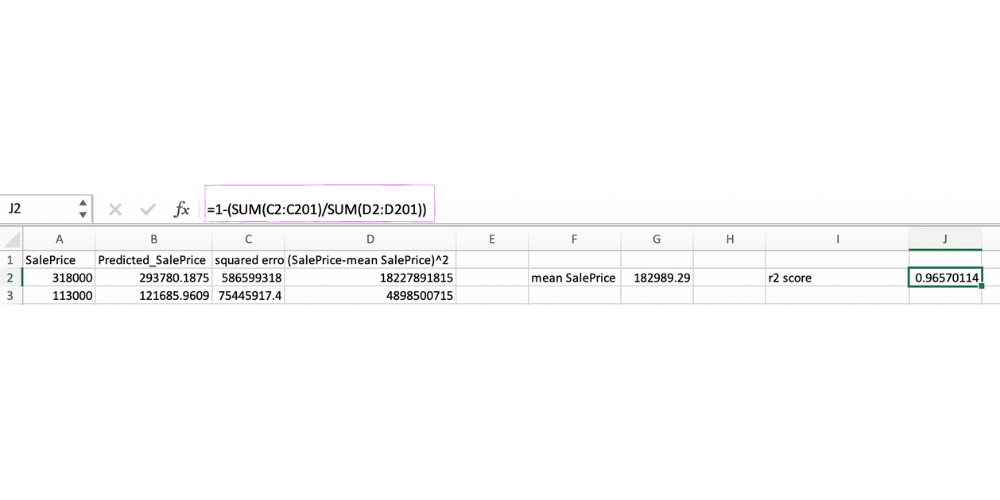 The calculations show that the predictions had a root mean squared error of 14058.58 and an “R squared” score of 0.97. Similar steps can be followed to calculate other metrics as required by the user.

Scatter plots are also useful in visually representing and evaluating regression model performance. The “actual vs predicted values” scatter plot is one such plot that is widely used. The screenshots below show how we can generate this plot offline from the batch prediction results using Excel. 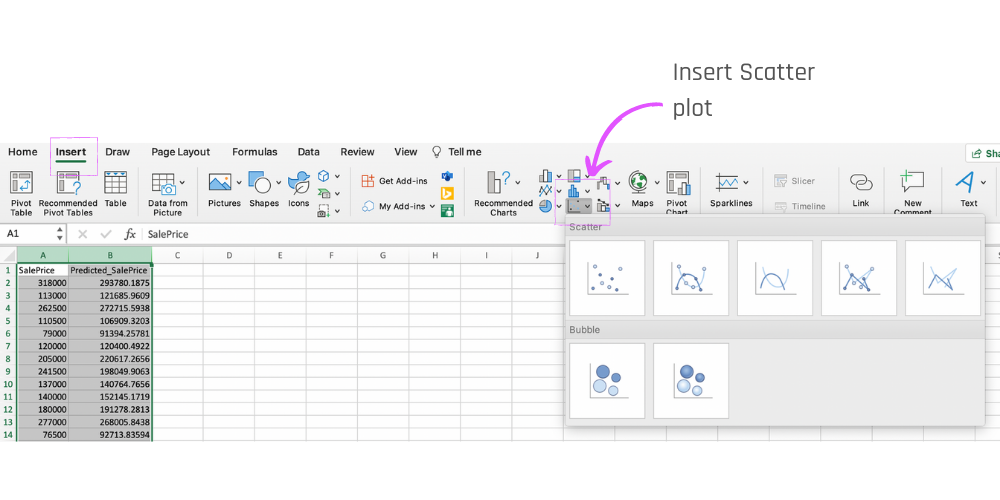 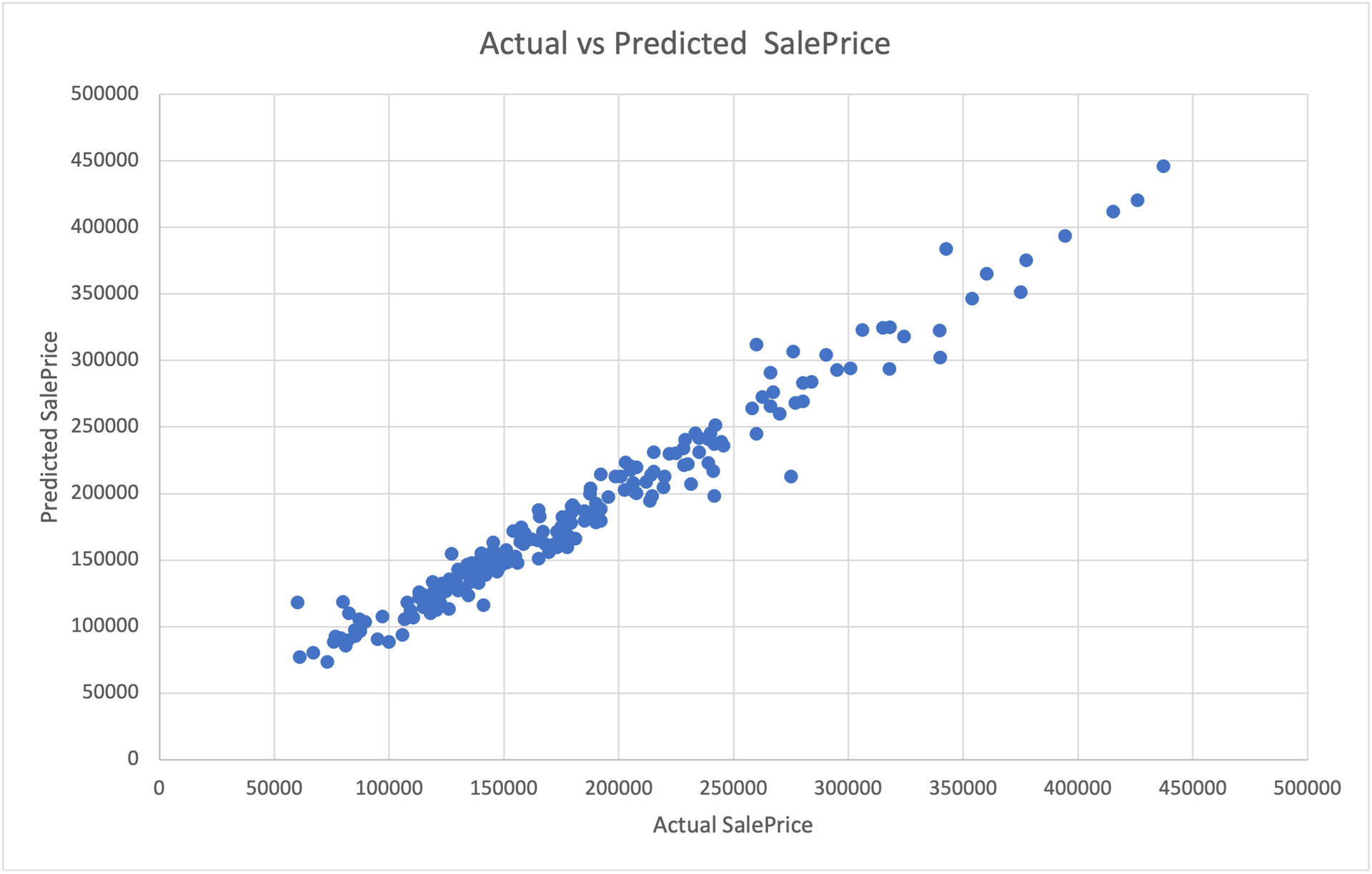 Other useful plots such as “error (residual) vs predicted value” scatter plots or error (residual) histograms can also be generated in Excel using simple formulas and graphs.

For the classification example, we use the Breast Cancer Wisconsin (Diagnostic) dataset from Kaggle (You can access it here). This dataset contains features related to breast cancer diagnostics and a binary target column describing whether the observation is a benign (B) or malignant (M) breast cancer case. This file is used to train a classification model using the engine. Then, we uploaded 200 new observations, with their corresponding labels, passed them through the trained model in the batch prediction mode, and downloaded the results back in CSV file format. The ground truth classes for these observations are also retained in the batch prediction file. See Figure 1 for a snapshot of the batch prediction file downloaded from the engine. Let’s assume that class M is the positive class. 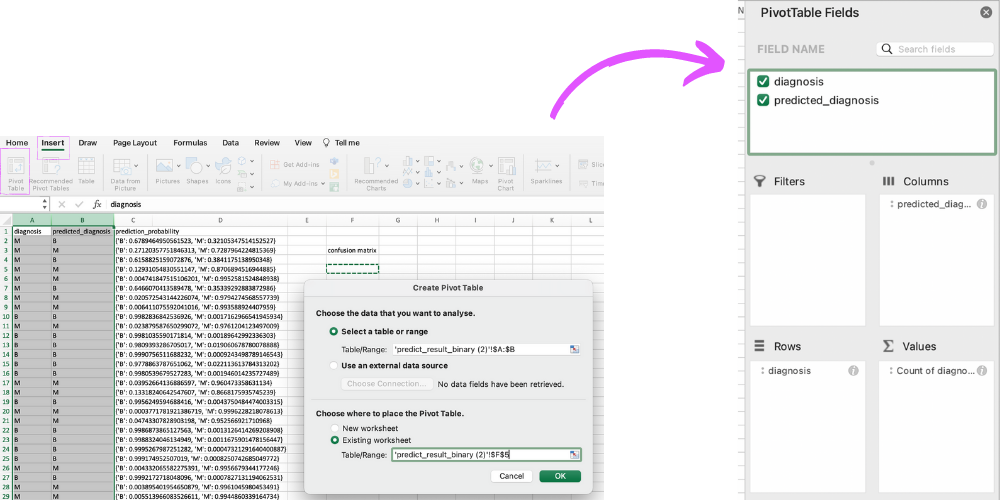 Step 2: Calculate metrics such as accuracy, precision, and recall based on the values in the pivot table and Excel formulas (calculating accuracy metric is shown below as an example). 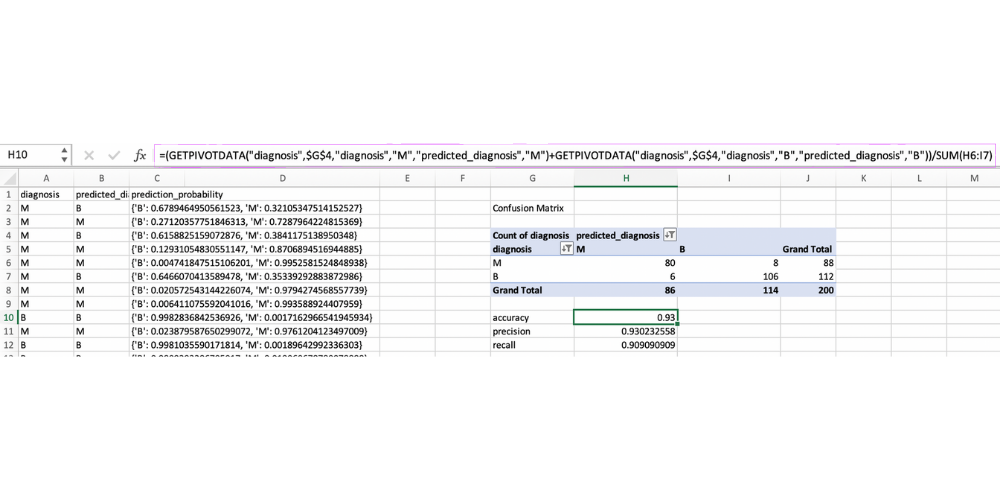 If we are interested in further examining the performance of the model, we can plot the predicted probability distributions of the ground truth positive classes and ground truth negative classes. The separation between these distributions is a proxy to the performance of the model. If they are highly separated, the model is less likely to confuse between the positive and negative records compared to when they are highly overlapping.

Here is a step-by-step workflow to plot two probability distributions as histograms using excel. The steps include:

Step 1: Obtain the positive class probability from the “prediction probability” column. This can be done using Data → Text to Columns and Home → Find & Select → Replace functions in Excel. 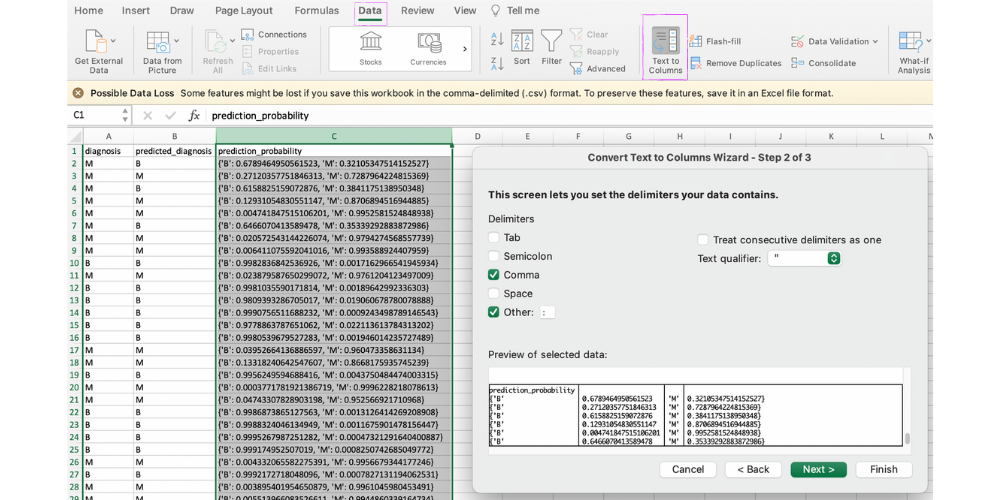 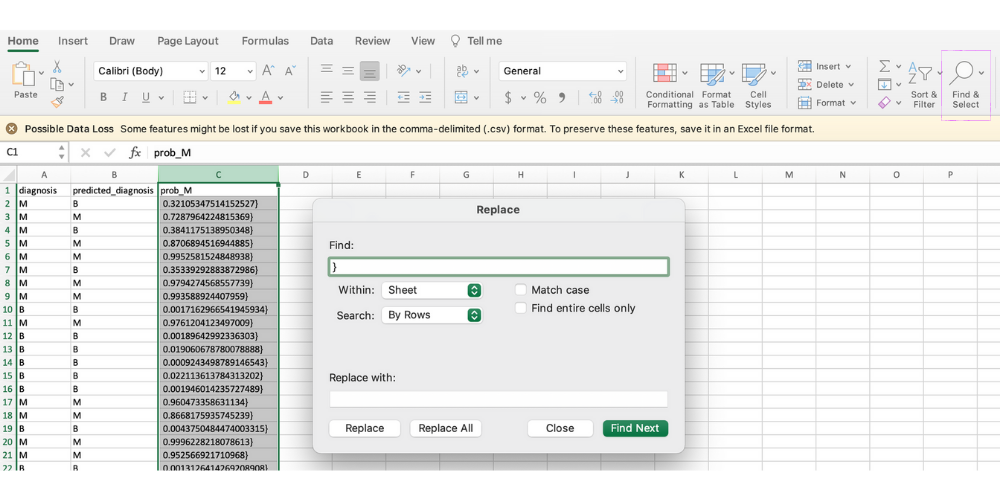 Step 2: Get the probabilities when the ground truth class is positive (M) and negative (B). Since Excel histogram doesn’t work with non-numeric cells (e.g. empty cells) we use a value of “5”, which is outside the range of probabilities to fill the null values. 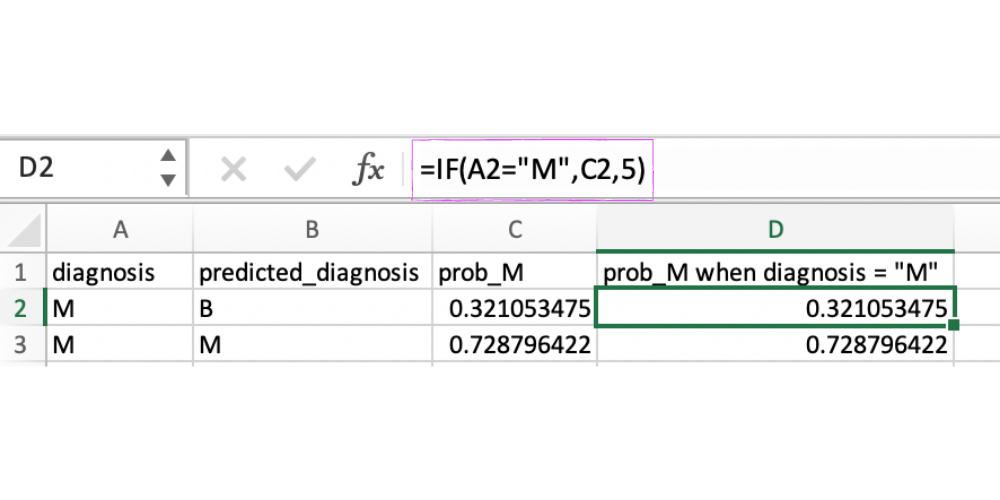 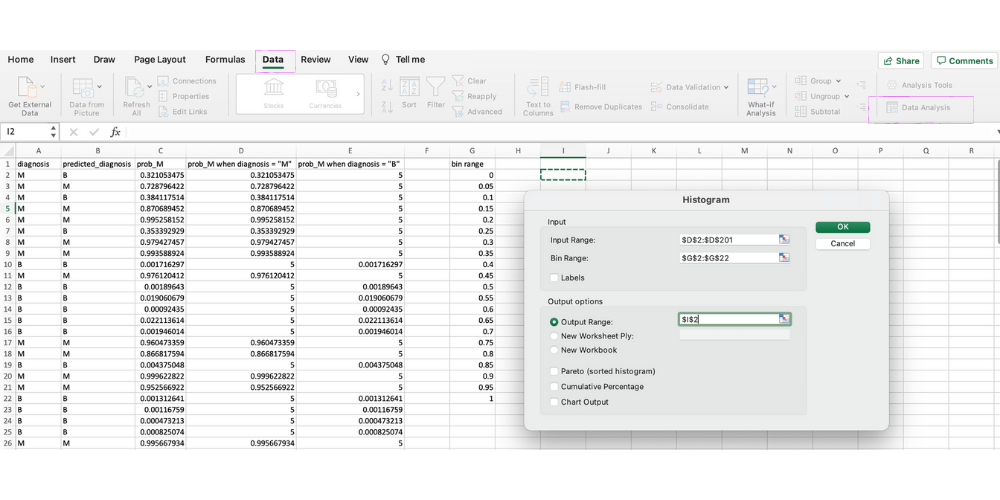 Step 4: Plot the histogram based on the bins and counts (Insert → 2-D Column). 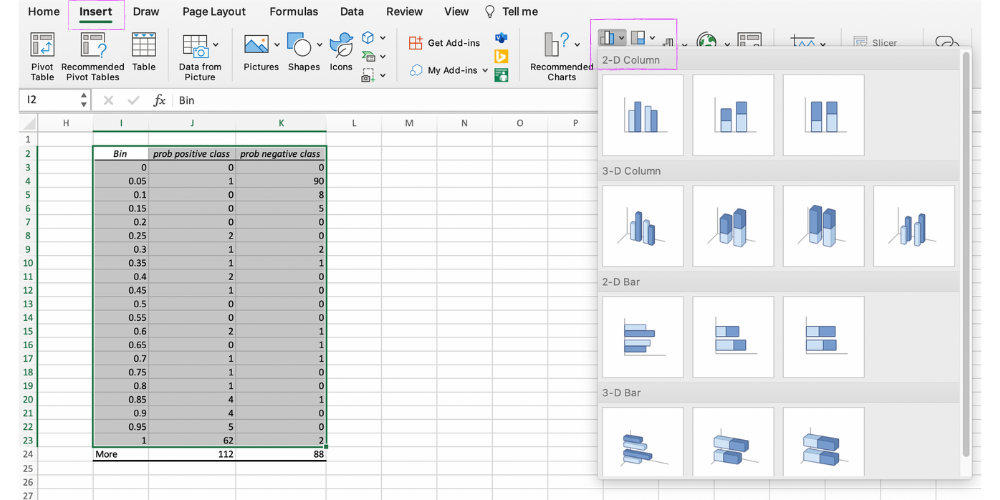 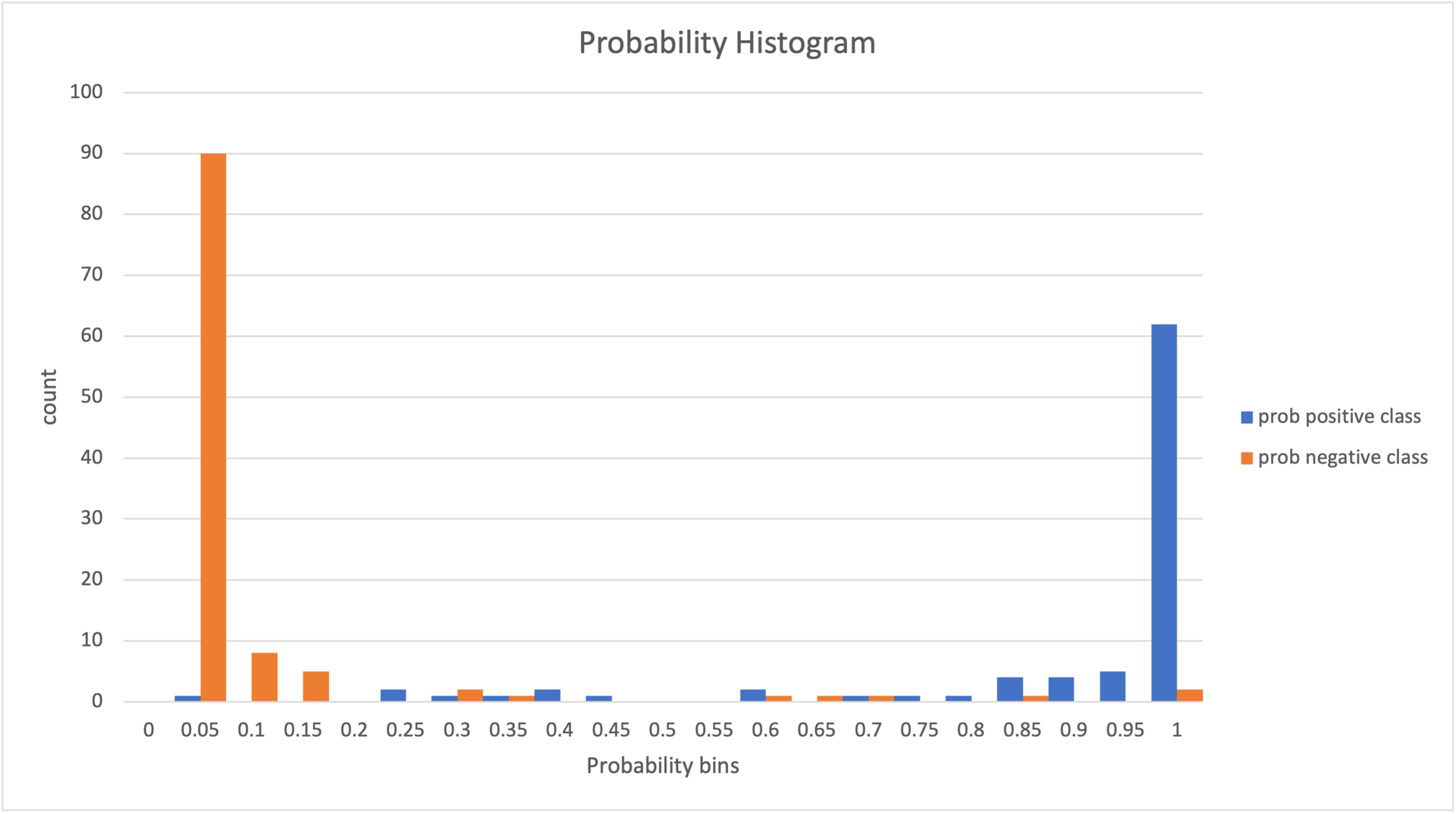 Here we demonstrated how we can use the batch prediction feature in the AI & Analytics Engine and Excel package to test model performance offline for new data points using two examples from two different machine learning problem types: regression and classification. Analyzing the performance of predictive models over new data points is crucial for businesses to determine whether the current model can continuously be used safely or they need a new model. As such, being able to seamlessly integrate results generated by the engine with popular spreadsheet software like Excel is another aspect of the AI & Analytics engine helping us advance towards our goal of empowering everyone with machine learning.

Why don't you try our batch prediction feature out yourself with the AI & Analytics Engine? Here's a 2-week free trial. Go on, try it out!

XGBoost has been making waves in the world of data science analytics and has become the go to algorithm of most data scientists for predictive...

The Pain [And Cure] for Feature Selection in Machine Learning

Feature selection is one of the most important steps in building a model. There is no hard & fast rule for it so you will have to try a number of...

If the data quality is poor, so will be the model and consequently the predictions. In the world of computers, it’s called GARBAGE IN, GARBAGE OUT.