Classification in machine learning is the process of building a model that predicts the class of an observation, based on its features.

Introduction to Classification in Machine Learning

Classification in machine learning is the process of building a model that predicts the class that an observation falls into. The classification model trains on a dataset, known as training data, where the class (label) of each observation is known (see supervised machine learning below), and the model can therefore predict the correct class of unknown observations. The classification model predicts the class/label (target variable), based on the features (input variables) of the training data.

Machine learning models are split into three categories depending on if the dataset has a labelled target variable and the type of label; 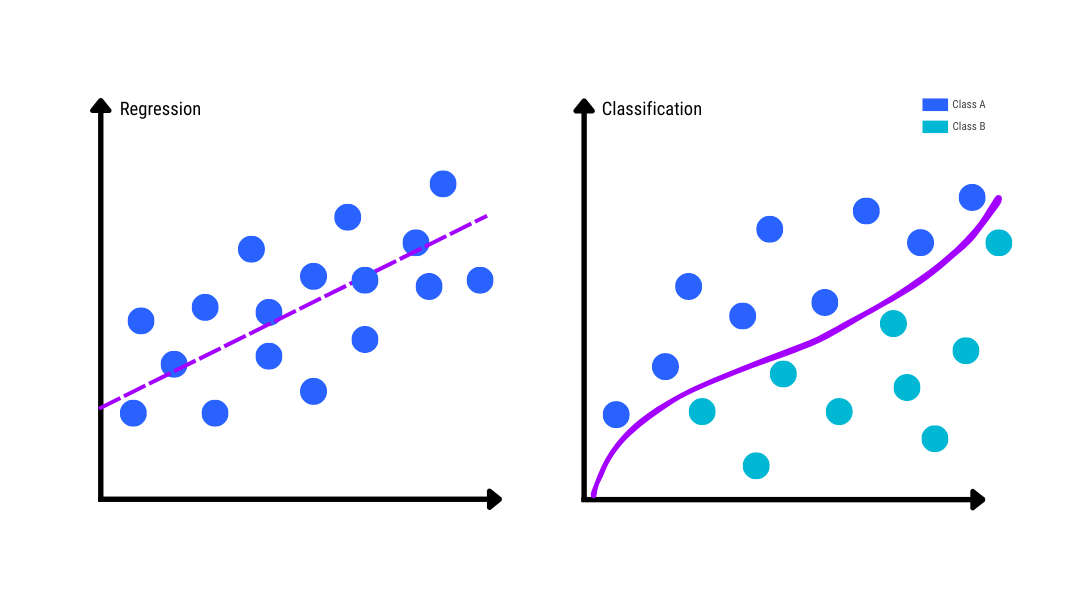 Clustering helps discover natural patterns by dividing and grouping observations that are similar.

Dimensionality Reduction is used on training data and removes excessive features in order to simplify and improve the quality of the data.

Reinforcement Learning is a subset of machine learning separate from supervised and unsupervised learning. The software agent is able to interpret its environment and self-trains to make the optimal action through trial and error. It does this through a reward-punishment feedback mechanism which acts as a signal for positive and negative actions, eventually leading it to the optimal solution. 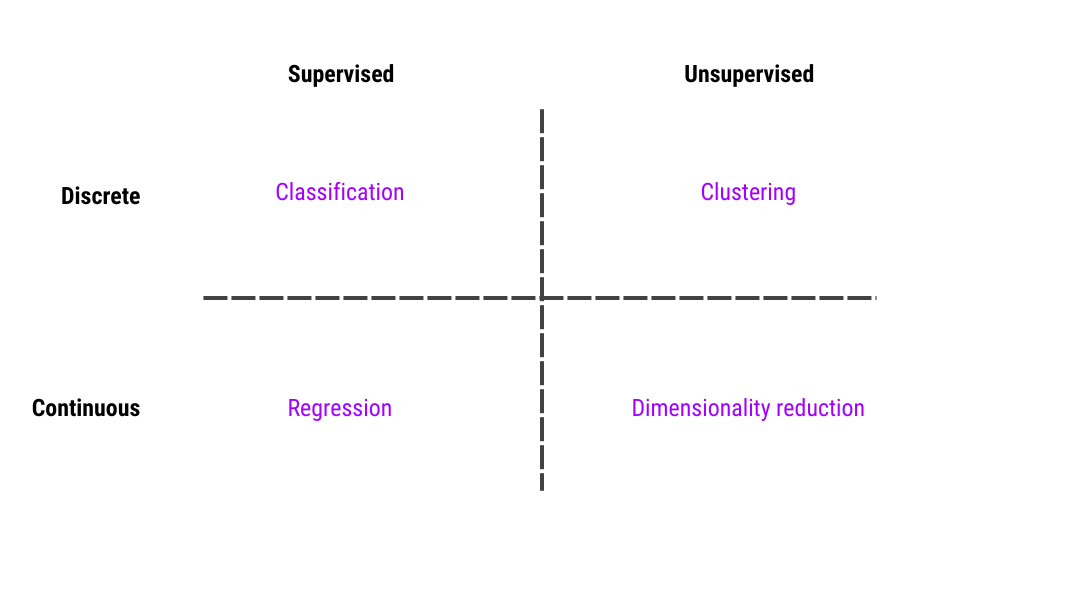 There are three types of classification based upon the nature of the label that is being predicted;

Binary is used when there are two possible outcomes for the label, for example, true/false. Each observation is assigned one and only one label.

Multi-class is used when the dataset has three or more possible classes for the label, for example, red/green/yellow, etc. Each observation is assigned one and only one label.

Multi-label is used in a dataset where each observation is assigned a set of multiple labels.

How machine learning models can learn

Lazy learners (Instance-based learners) store the training data and delay building a model until it is provided with test data to classify. It predicts the class of a new observation by making local approximations based on the most related stored data. This means that training time is relatively low, however, prediction time is relatively high.

Eager learners are given training data and immediately build a generalized classification model before it receives test data to classify. An eager learner commits to a single hypothesis that covers the entire dataset. This means that training time is relatively high, however, prediction time is relatively low.

There are many different algorithms that use different approaches to predict classes in machine learning, however, the optimal algorithm depends on the application and dataset that is given.

Naive Bayes is an algorithm based on Bayes Theorem that can be used in both binary and multiclass classification. It assumes the features in the dataset are unrelated to each other and contribute to the probability of the class label independently. Naive Bayes is a simple and fast training algorithm that is used for large volumes of data, for example classifying text in the filtering of spam emails. 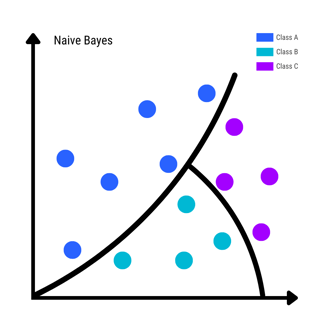 KNN is a lazy learning algorithm, and therefore stores all instances of training data points in n-dimensional space (defined by n features). When new testing data is added, it predicts the class of the new observation on a majority vote based on its k nearest neighbors (k number of observations that are closest in proximity). The newly classified observation then acts as a new training data point for future predictions. KNN is a simple and efficient algorithm that is robust to noisy data, however, can be computationally expensive. An example of KNN in action is recommendation systems used in online shopping. 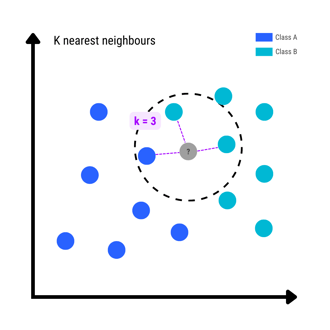 The decision tree algorithm builds a top-down tree structure made up of decision nodes (questions about the features) and leaf nodes (class labels), building out the decision nodes until all observations from the training dataset have an assigned class. The decision tree makes it easy to visualize the classes and requires little data preparation, however, a small adjustment in the training data can completely change the structure of the tree and may make inefficient overly complicated trees when there are many possible classes. This is helped by XGBoosted decision trees. 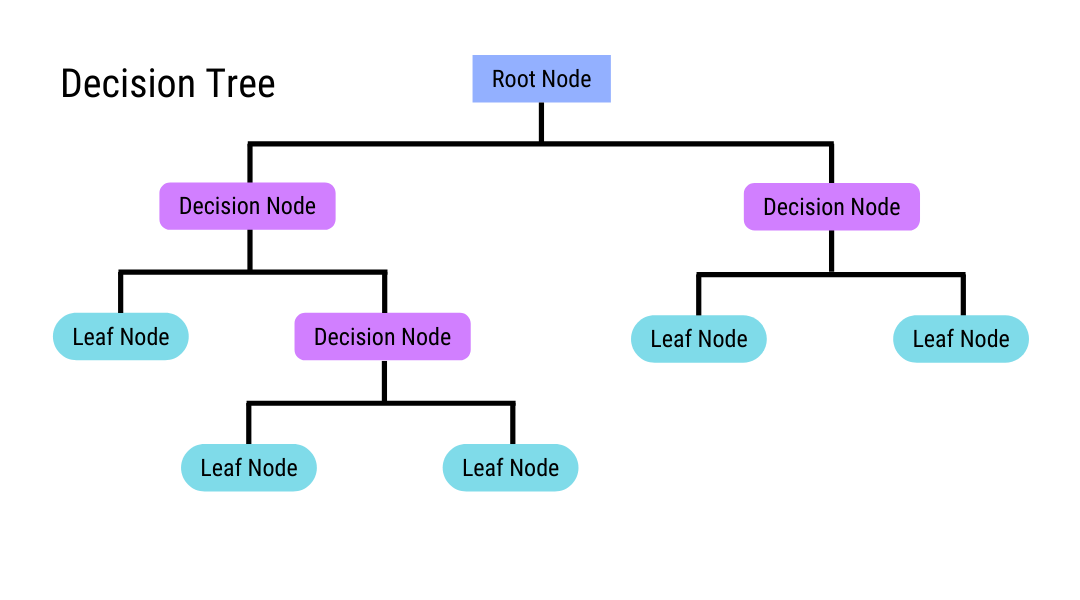 The Random Forest algorithm constructs multiple decision trees using subsets of the training data, and predicts the label of test data by taking the most commonly found (mode) class for an observation across the multiple trees. This is done in order to reduce overfitting that may occur in complex decision trees and is, therefore, more accurate for unseen test data. 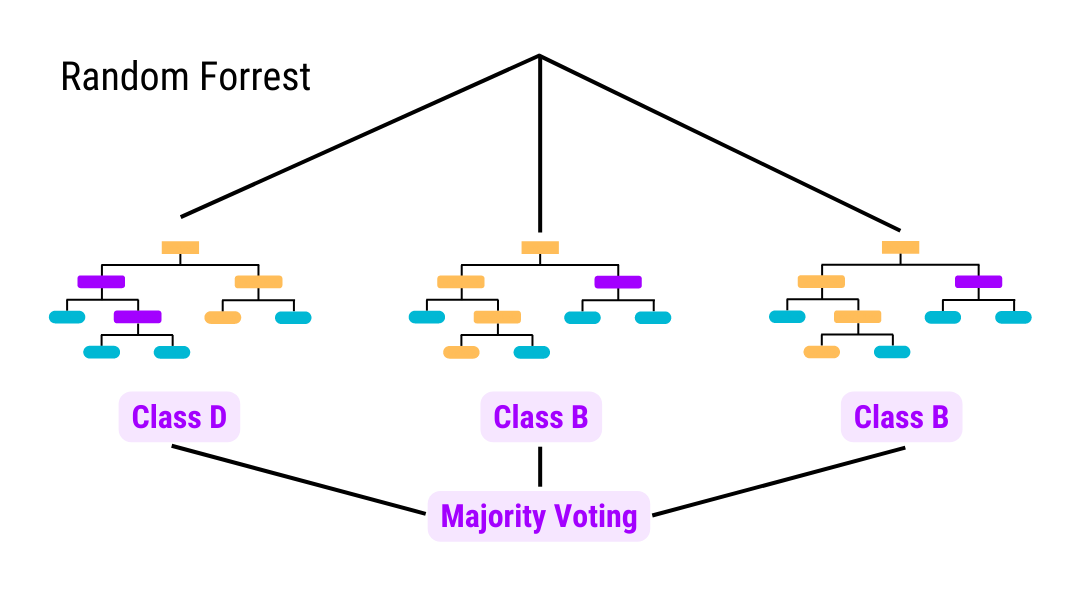 SVM is an eager learning algorithm used for binary classification. Like KNN, SVM places observations in n-dimensional space and separates the two classes using a decision boundary called a hyperplane, which is the widest “gap” (called margin)  between the two. Test observation labels are predicted based on which space they fall into. SVM works best when there is a clear separation of classes and when there is a large number of features in the training data, however, it is computationally expensive with large data sets and doesn’t perform well when there is noisy data, as there is a smaller separating margin.

Once the classification algorithm has been trained and provided with training data, it is important to check the accuracy of the model through testing, otherwise known as classification evaluation.

Cross-validation is where the dataset is partitioned into k number of folds (groups). From here, k-1 folds are used for training, and the remaining fold is used for testing, meaning there are k unique train/testing permutations that can be tested. The multiple numbers of tests provide a more accurate representation of how well the model would perform for unseen test data in comparison to the holdout method.

Classification metrics are the numbers used to measure the effectiveness of the classification model. Before we delve into the measurements, we first need to understand the results which are given in the form of a confusion matrix of size n x n. For a true/false binary classification example, the cells would contain the following:

Accuracy is the fraction of correctly predicted classifications to total predictions made [(TP+TN) / (TP+TN+FP+FN)]. However accuracy can be misleading when there is an imbalance in the ratio of classes, and in the case of multiclass classification, does not give insight into which classes are being predicted well, which is where the following metrics are helpful.

Recall is a measurement of how well the classification model predicts the true positive classes and has the equation TP / (TP+FN).

Precision is a measurement used to understand how well the model performs when it predicts a positive class, and has the equation TP/(TP+FP).

Sensitivity is also known as the true positive rate and is the same as recall.

What Machine Learning Use Cases are considered Classification Problems?

As classification is teaching machines to group data into categories by particular criteria, the applications are broad. Some common use cases include:

A classification algorithm can be trained to recognize email spam by learning the characteristics of spam vs a non-spam email.

Using production data, a classification model can be trained to detect and classify types of quality control issues like defects.

Transaction details data such as amount, merchant, location, time can be used to classify transactions as either legitimate or fraudulent.

Machines can analyze pictures through pixel patterns or vectors. Images are high-dimensional vectors, that can be classified into different classes such as a cat or dog, or car. A multi-class classification model can be trained to classify images into different categories.

A multi-class classification model can be trained to classify documents into different categories.

There are two types of classification tasks:

Concerns defining the type, genre, or theme of the text based on its content.

Concerns the use of pixels that make up the image to identify the objects pictured, and classify them by behavior or attributes.

Customer buying patterns, website browsing patterns, and other data can be used to classify customer activities into different categories to determine whether a customer is likely to purchase more items or not, and therefore market to.

So that’s the basics of classification, all wrapped up into a single article.

Subscribe to our blogs and stay tuned, because there’ll be a future article about all things regression coming out soon!